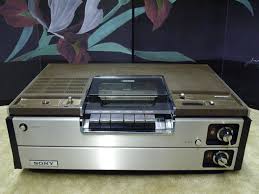 You think you enjoyed Blu-ray vs HD DVD? Memory Stick vs SD? Pshaw! You haven’t seen a format war until you’ve witnessed the betrayal and bloodbath that was Betamax vs VHS.

Click to viewSony was supposed to win this. The company made magnetic tape out of like paper and mud back in the 1940s, turned out a “pocketable” transistor radio in the 1950s, and invented the “portable” television by 1960. They had their first video tape recorder by 1963. They weren’t the only ones, but they were among the first and best.

The so-called VTR business had a rocky start. The things were hulking bastards, with huge price tags and poor recording capability.

A company called Ampex put out the first “home entertainment” VTR in 1963, only it cost $30,000 in the Neiman Marcus Christmas catalog, and was nicknamed Grant’s Tomb because the product manager who thought it up was going to be shoved inside by the company’s accountants. (He would have fit, too, the thing was so big.) Sony comes along in the middle of that decade and puts out a $1,200 “portable” VTR that came with a leatherette case and its own TV. It still weighed 65 pounds.

The worst part about these 1960s VTRs was that they were basically reel-to-reel—you had to thread your own 1-inch videotape through spools and stuff, and by the end of the decade, a one-hour spool of tape was like 8 inches in diameter. Can you imagine your TiVo needing 180 spools of videotape to get the job done?

As Sony toiled on the videotape problem, Matsushita—who we now call Panasonic—and its independent subsidiary JVC weren’t really standing out in the VTR business. Let’s say this: Nobody would have guessed they’d be able to overthrow Sony and kick mecha ass within the decade.

However, these guys were among the biggest manufacturers, dwarfing Sony many times over. Matsushita, known for efficiency, not innovation, tended to focus on big boring appliances—TVs, refrigerators, air conditioners—with a smaller team, branded Technics, devoted to dominating the hi-fi realm. JVC was all about TVs and audio gear, and had decent video know-how.

It was Sony who solved the reel-to-reel problem with—ta daaa!—a video cassette. It was called U-Matic, and at 3/4″ thick, it was smaller than the earlier formats, but still a bit of a chunkster. Since video was a bit of a Wild West, Sony felt like it needed partners to firmly establish a format, and to avoid a format war. It asked Matsushita and JVC, who said “yes” as long as Sony adopted some changes. They key here: The partnership included a deal where everybody shared all the patents. Turns out, probably not the smartest move by Sony.

Sony was right to form a posse, though. Every single electronics maker in Japan, Europe and America was trying to build a video recorder. Some American firms were obsessed with lasers (though ironically it would later be the Dutch and Japanese firms who actually put lasers to good use); other American firms were jazzed about microfilm…for video. None of them had success. Before we get on with the story, here’s a list of totally failed video players and recorders:

See what I mean? A friggin’ mess it was.

Part of the problem was the message. Nobody knew what the hell this was all about. Sony wasn’t just a pioneer in the technology, they thought hard about how to explain why you totally desperately want something bad. At one point, Sony hired Bela Lugosi to dress up one last time as Dracula, and explain that, since he worked nights, he needed to catch up on primetime shows when he got home. Get it? Vampires—they’re out killing people when Barney Miller is playing! It was a good bit, and there were a lot more like it. Little by little, the public caught on to what VCRs were for.

Anyway, U-Matic, launched in 1971, wasn’t a runaway success, either, but it was the bestselling video recorder to date, and the first successful VCR. In the realm of pro video, it was hot. Sony cashed in by steering from the home market to the businesses but JVC, who kept trying to pitch it for home use, got hosed. Like villains in some Shakespearean play, Matsushita and JVC kinda lurked in the background, planning for the next round when they might one-up that little charmer, Sony. The name of their plot? Video Home System, which you and I call VHS.

Sony was naive. Like, crazy naive. In 1974, it asked Matsushita and JVC to partner up again, this time on a fully baked format called Betamax. They weren’t asking for intellectual collaboration, just a deal to make and sell the things. It was a nice system, with really small tapes, but the problem was, the tapes only recorded for an hour. Sony was like, “That’s not a problem,” but everyone else was like, “Yes, it is.” The would-be partners dragged their heels suspiciously, not signing any deals. Sony kinda thought that was weird, but went ahead and launched the one-hour Betamax box in 1975.

Not long after Sony went into wide release with the one-hour Betamax, JVC pulled a two-hour VHS out of its butt. And in time for Christmas 1976 no less. Sony had another flash of naivete when it pressed on with the one-hour system for a while, even though it had a two-hour system in the works. In that gap, JVC and its big poppa Matsushita scored sales and recognition.

Some people say Betamax was “better” but that depends on many factors, and could very well be an urban myth. The technologies were so close Sony’s own chairman called VHS a copy of Betamax. What may have looked good in one system with certain settings might not look as good on another with different settings. And by some accounts, Betamax’s more moving parts meant they were more expensive to manufacture and more costly to maintain and repair. It’s not an open-and-shut case of quantity vs. quality. Either way you look at it, there are compromises.

By this point, it wasn’t just some anything-goes contest with a million formats. By 1976, all those above had died or were dying. In Japan, there were just two choices. The Japanese government told everyone to sort it out. Hitachi, Mitsubishi and Sharp joined Team VHS, but didn’t really move forward.

In February 1977, Sony grabbed Toshiba and Sanyo, and then signed the American powerhouse brand Zenith up for an order of Sony-made Betamaxes with the Zenith name on them. Was it going to happen for Betamax after all? Seemed like they’d finally drawn at least a few good cards from the deck.

Sony might not have been totally screwed at that moment, but there were two American powerhouses, and the other one, RCA, was undecided. Ironically, the fate of the Japanese VCR industry relied on how well it could handle the most American of sports: Football. In other words, now that both players could manage two hours of recording time, what RCA wanted was enough recording time to capture a game—three hours would do.

What transpired next is unclear. Even though, at the time, both technologies were limited to two-hour capacity, Matsushita pledged to make RCA tape machines that could record for four hours.

Was this a lie? Was it vaporware? Whatever the deal, JVC engineers pulled off a four-hour capacity six weeks later, and RCA agreed to buy 55,000 machines that year, and up to a million more in the next three years. Better yet, RCA’s SelectaVision VHS decks would cost $300 less than the two-hour Betamaxes, at $1000 a pop.

Although Betamax hung on for a bit longer, that, boys and girls, was the end of the competition. In 1979, Sony market share tilted downward, and by 1980, the jig was up for those poor bastards.

Note: I recognize that there are other issues that might have come into play here, including Universal’s lawsuit of Sony, which lead to today’s Supreme Court definition of fair-use copyright law, and the fact that some studios, including Warner, began squeezing movies onto videotape early, with varying degrees of success. However, I contend that none of that changed the outcome—the war above was fought between Sony and Matsushita, and Matsushita won.

SOURCES:
Fast Forward: Hollywood, The Japanese, and the VCR Wars – James Lardner (Special thanks to you, Jim, for chatting me through some of this)
Sony – John Nathan
The History of Television – Albert Abramson
Sony History – Sony Global Website
Made in Japan – Akio Morita
Quest for Prosperity – Konosuke Matsushita
[PDF] Case Report on Betamax – Verardi et al
“Why VHS was better than Betamax” – Guardian UK – Jack Schofield